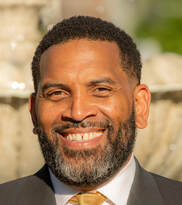 Rashid F. Sidqe
Executive Director
Rashid F. Sidqe, community leader and advocate, has worked to improve the social and economic conditions of the hard-to-serve population in the Greater Sacramento region for much of his adult life.

​To strengthen his efforts, Rashid Sidqe founded Lift Up Love Always (L.U.L.A), a non-profit organization with an ambitious vision and mission to focus on restorative justice, police reform, and reducing recidivism in underserved communities by increasing employment and training opportunities with researched driven data. Under the L.U.L.A. umbrella, he brought in the Law Enforcement Accountability Directive (L.E.A.D), an advocacy program which has been instrumental in leading the fight for police reform in the City of Sacramento.

Sidqe grew up in Sacramento by way of Houston Texas, graduating from Grant High School in 1988. He went on to attend Morris Brown College in Atlanta, Georgia. After college, Sidqe returned to Sacramento, where he started his family and raised three beautiful daughters. Sidqe began work for the Greater Sacramento Urban League in 1995, as the Case Manager of the General Education Diploma (GED) Program, where he played a large role in graduating over 400 students. He soon was promoted to the position of Supervisor and then Director of Youth and Adult Services and eventually became the Vice President for the Greater Sacramento Urban League.

In 2002, Sidqe transferred to a smaller agency, the Center for Fathers and Families. This agency had a heavy youth focus, which was the core reason why Sidqe decided to work in social services. This agency’s focus was on underserved youth in Sacramento and provided quality after school services. Sidqe returned to the Greater Sacramento Urban League in 2014 following the creation of more than 20 sites in underserved schools throughout the Sacramento Area.

More than two decades later, Sidqe remains involved in his community with expertise and a deep passion for improving health disparities, reducing high drop-out rates, and eliminating the high unemployment rate. His contributions have led to innovative solutions and transformative public awareness.

Sidqe is a dynamic leader, public speaker, skilled organizer and tough negotiator when it comes to the betterment of his community. Sidqe has been instrumental in bringing about positive change in the greater Sacramento area, while tirelessly aiding his community and helping the underserved gain access to much needed resources.

Sidqe’s drive continues to be fueled by the mission of equality for all, the spirit of Sacramento, and commitment to his community to bring fairness and justice for all.
Donate